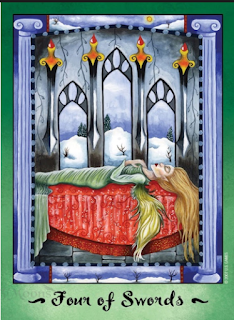 Interesting that I pulled this card just as I decided that I was going to work from home next week.  I do need a break from Chicago and all that is going on.  The bottle spell (releasing) was huge for me.  I have to be honest and say that i was really sad and wondering if I did the right thing at first, but now I know it was the right thing to do.  I feel so much freer.  It feels as if a weight has been lifted from my shoulders.

I had forgotten all about that spell to release my feelings and let fate take its course.  Looking back, I realize that was the beginning of letting go and not letting myself be so obsessed by my feelings for one person.  It took courage to let go and it takes courage every time I make a decision to not go to Chicago and to not turn to him for support.  However, as my relationship with X has gotten looser and not so obsessive, my relationship with S. has become nonexistent.  I have the feeling that the only thing truly holding me to S. was my obsession to X as I was desperate for guidance and advice.

In some ways, it makes me really sad, but in other ways I know that it is for the best and that it is really time for me to let go.  My relationship with S was always kind of weird because he could be so controlling some times and so convinced that his way was the right way.  I thought we had worked through all of that and were in a good place, but now I'm not so sure.  Sometimes it feels as if he just wanted me to be a client and not be a friend.

The only thing I can really do is send him love and light and let go.