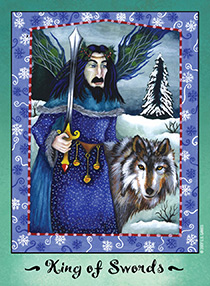 Guidance:  Be fair and objective, listen to others, be intellectually honest

Interesting, I did not journal when I pulled this card originally.  I'm sure it is because I was super busy and caught up in work.  I love this card.  Most people would take it as a reminder to listen to other people's points of view, but I consider it a reminder to value my own point of view.  My upbringing by the Bitch taught me to value other people over myself so it is second nature for me to discount my own beliefs to appease others.  However, recently I have begun valuing my own point of view and truly listening to and asserting myself.

That is really uncomfortable for me because it feels like I am sticking myself out there and setting myself up to be stomped on, but it is important that I assert myself and make my thoughts and feelings known.  It was uncomfortable this week at work as I had to assert myself regarding the demo we were doing and sometimes it felt as if I was a broken record, but in the end I got support and we ended up including OCM and it was great as they guys wove it into their presentation seamlessly.

Asserting myself and standing up for myself feels uncomfortable and there are times when I feel as if I have two speeds:  Door Mat and Freight train, but that is because in the past, I did not do a good job of asserting myself until I got really pissed off and then it seemed as if it was the first time I had said something, when in reality no one had chosen to listen to me before.

John was wrong in calling me a freight train because he chose not to take responsibility for our lives or anything that was happening so because I was willing to assert myself and take responsibility, I was a freight train.  The reality of the matter is that if he had chosen to be an equal partner in our marriage, we would have not had all the problems that we had.  Instead, he chose to be passive and as a result, I was viewed as domineering.

It is so valuable to look back on my marriage through the lens of time and see that all the horror and pain he put me through were not really about me at all, but were about his own self esteem issues and his own inadequacies.
- October 23, 2016
Email ThisBlogThis!Share to TwitterShare to FacebookShare to Pinterest
Labels: Daily Draw, Fairie Tarot, King, king of swords, Swords