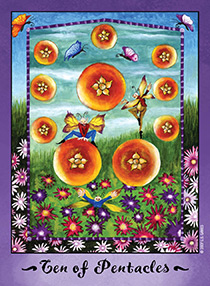 First Impressions:  Focus on love and emotional ties over vanity and status

Book:  Emotional loss, loss of belongings, home life is not fulfilling, no sense of fulfillment

Guidance:  Focus on love, be open

This was a good reminder that it isn't all about money.  it is important to focus on emotional fulfillment as well as financial fulfillment.  I think we did that by going out to dinner and having a nice evening out.  The carriage ride was the icing on the cake and it was awesome to learn about our city from someone who really gets it.

I'm realizing that like with all things there needs to be a balance between money and emotions.  I always thought that John and I were happy, but I'm realizing that being poor kept us together.  We were both so worried about being broke, that it was easier to stay together than to contemplate being single and broke.  The house was what truly broke us apart because we really could not afford it and it exposed all of the cracks in our relationship.

Interestingly enough, I'm making so much more money now and I feel so much more secure than I did when I had to rely on John to pay his half of the bills.  He was never very reliable and deep down inside I knew it, but I kept lying to myself about his reliability and I kept believing his lies.  I remember when we were really struggling and he kept refusing to get a job.  Or when he had a job and he quit because he didn't like it and didn't do anything to get a new one.

Looking back, I realize that he was suffering anxiety and depression then, but he refused to admit it.  He was so much better at self medicating than facing his problems and doing what needed to be done.  Even though I know that he was depressed and struggling, it is still hard for me to feel compassion for him because he chose not to do the right thing and he chose to make us all pay for his depression.

There is a part of me that feels like I will never trust anyone again because I am afraid of being taken advantage of, but that is not a good way to live.  I need to accept that I am stronger now and I am in a much better place than  I was eight years ago.
- November 04, 2016
Email ThisBlogThis!Share to TwitterShare to FacebookShare to Pinterest
Labels: Daily Draw, Faerie Tarot, Pentacles, Ten, Ten of Pentacles