Book:  Speaking in signs and symbols,

Guidance:  Prepare to leave the familiar, accept the power of your imagination

This was one of the strangest days I've had in a long time.  I was running late 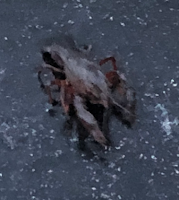 for work and it was pouring down rain so I was frustrated, but then when I got to the car I saw a little shell creature on the ground.  I thought it was dead, but then it started moving around.  I tried to rescue it so that it was out of the path of the cars, but I was a little afraid to pick it up.  I finally got it to a little bit safer place and left to go to work, but the little critter kept nagging at me as I know enough to know that when  weird creature shows up, there is some mystical meaning.

The words that kept coming up in my search for the meaning of the shell creature were coming out of your shell and shedding old beliefs and old ways of doing things.  It was also about intuition and going within.  As I meditated on that, I realized that I had fell back into some old and bad behaviors in dealing with other people.  I was doing a lot of othering and complaining about people.  I was labeling them as bad instead of their behavior as bad.  That's a behavior I definitely need to grow out of.  The other realization I had was that I needed to climb out of my shell and be open and vulnerable.  I've been doing a lot of work to move in this direction, but there is still more work to be done.

After much drama, my flight ended up getting cancelled and I decided to drive.  Scott ended up texting me and when I shared the picture of my little shell buddy, he immediately realized it was the crustacean from the moon card and reminded me that the moon was about trusting my intuition and being open.  All of this gave me a lot to ponder on my drive home and as it got dark and a beautiful orange almost full moon came up, I realized that they were tapping me on my shoulder and reminding me that there is magic and mystery in this world.

Interestingly enough as I talked to my daughter about this weird turn of events and the magical and oddly unexpected shell creature, she reminded me that the lobster/crayfish was about outgrowing your shell and about it being time to move on.  There is so much to digest here and I'm not 100 percent sure what it all means, but I will continue to reflect and ask for guidance.

Scott texting me
My little moon buddy
Getting home safely


- July 18, 2019
Email ThisBlogThis!Share to TwitterShare to FacebookShare to Pinterest
Labels: intuition, leaving the familiar, letting go of the past, Moon, moving on